The serene south Florida landscape adopted a bit of French culture in Spring 2010 when Birchmier Construction turned over the CO for the new St. Bernadette Catholic Church to the Diocese of Palm Beach.  St. Bernadette’s new 32,000 square foot facility, located just a few steps from its longtime temporary home of 13 modular trailers had been a vision for over a decade.

“It’s a source of great pride for me,” Father Victor Ulto said in 2008, at the groundbreaking ceremony attended by over 1,000 St. Bernadette parishioners, many of whom originally worshiped in a nearby movie theater.  “I now have a sense of what a new parent goes through when they watch their children grow into something really beautiful.”

When St. Bernadette held its grand opening only 15 months after groundbreaking.  Ulto was reminded of his and the parish’s labors.

“We are mindful of Our Lady’s words to our Bernadette at Lourdes: ‘Go and build a church here,’” said Ulto, the founding pastor of St. Bernadette Catholic Church.  “We dedicate this church today to the glory of God in response to this request, and in thanksgiving for all that God has given us.”

From the initial site work to the hanging of the sacred cross high above the altar, Birchmier Construction carried out Ulto’s vision.  Partnering with noted worship architect Rick Swisher, of Winter Park, Birchmier created a modern monument with touches of the past, most notably the homeland of St. Bernadette.

“From the very beginning, we knew that the building needed to reflect the Old World, traditional church lines, both inside and out,” said Randy Birchmier, President of Birchmier Construction.  “It had to be large, to fit 1,700 people, but also intimate.  And, it needed to conform to today’s stringent South Florida building codes.  The entire structure was created to withstand 140 mph winds.”

Creating a massive structure that embraced classic architecture and blended common areas with the Cross was a perfect fit for Birchmier.  Here is the story.

From the beginning, the church of St. Bernadette was envisioned to pay homage to two main influences, the Roman Gothic architectural style of the 12th century and the cultural influences of St. Bernadette’s native France. This monumental task was laid at the feet of award-winning church architect Rick Swisher, who melded the two styles into a functional fit for the 21st century.

“While St. Bernadette retained many of the core architectural philosophies of the modern age, the Diocese of Palm Beach and Father Ulto really wanted to incorporate the style found in many of the old churches of Europe, and particularly France,” said Swisher. “We started with that style in mind, gradually incorporating modern materials and best practices to create the structure.”

The church entrance faces the north, marked by 10-foot high, 2.5-inch thick Sapele (mahogany) doors more reminiscent of English castles than a South Florida church. The entrance also includes a covered walkway and sweeping window wall leading to the Family Life Center and parish offices. The design allows the church and office space to be separated by a defined line of demarcation, but subtle in its flow and completely blended into the overall church design.

“By combining the concrete and EIFS facade of the church with the aluminum, glass, and steel of the Family Life Center, we combined the old with the new,” said Swisher. (In fact, using Birchmier’s ongoing cost savings design approach the team worked with Swisher to build a metal structure building, saving the church $100,000.)

To the east, Swisher and Birchmier executed a perfectly-placed porte­cochere, allowing handicapped, easy vehicle-to-pew access to the church and providing weather cover for Florida storms. To the south, the church’s semi­circular rear chapel is both a work of art and art of building. 100-year-old stained glass from an old Boston church adds color and light to the entire interior. Staying true to modern decoration (and local building codes), flying buttresses and overly ornate appointments were discounted for a more contemporary approach.

Creating a waterproof, low-maintenance environment was paramount, so Birchmier built the entire roof and EIFS system to be worry-free, with a warranty coverage of 5-10 years, with no dollar limit.

With a 66-foot-high peak, Swisher and Birchmier allowed the interior the full space beneath, incorporating vaulted ceilings, an expansive window scape and full auditory exposure below.

Along the mainline, Swisher incorporated twin row of 26- stained glass pieces on the east and west sides of the church in the Clerestory, allowing the entire interior to be bathed in warm, colored light during daylight hours, an effect first seen on Gothic structures as early as 1135.

“We wanted the altar, tabernacle, and surrounding liturgical icons to be in full view of everyone, whether you were in the first pew or standing in the back of the church,” said Swisher.  “The use of the high, flowing ceiling structure allowed us to take an expansive view of the main focal points, allowing full physical and visual interaction at all times. The use of multiple pieces of stained glass on the east and west provided character to the interior, and allowed the building to ‘come alive’ during daylight.”

Saving money and time during the Great Recession was Job #1, and Birchmier delivered in spades. The project finished a full three months ahead of schedule, reducing costs for all stakeholders. The real hidden gem for St. Bernadette was uncovering $100,000 in savings, thanks to Birchmier’s leverage and activation of a Direct Purchase Program. Designed to allay the resource consumption associated with for-profit builds, Birchmier took the reins of material acquisition, leveraging the church’s ability to buy materials without sales tax.

In addition to the Direct Purchase program, Birchmier minimized excessive change orders by coordinating with the architect early (and often) in the design process. Working with Swisher’s design consultants, Birchmier and his team were able to get “way ahead of the project” and avoid the costly pitfalls of change orders down the road. The savings enabled St. Bernadette the luxury of adding a baptismal font and bell tower months — if not years — ahead of expectation.

PLANNING FOR THE WEATHER ON A CONSTRUCTION SITE 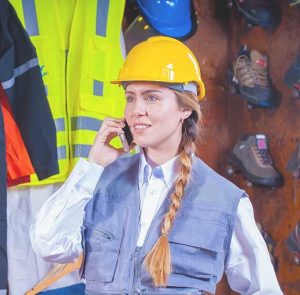